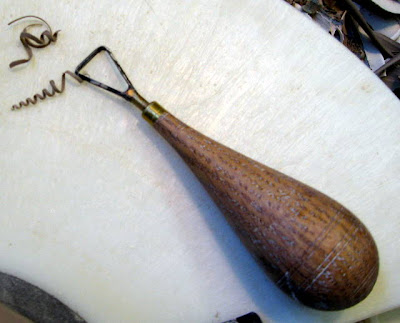 The Mudtool Mudcutter. This is one of the tools that I cannot live without. Ok, that is a slight exaggeration… it’s a tool that I can’t work in my studio without.

It’s basically a giant cheese slicer with a super thin wire. It’s on the expensive side (retails for about $30). When so many of our clay hand tools cost $2 – $5, this is a bit of a jump up. But it really a tool that I use every day, throughout the day in my studio, so for me, it’s definitely been worth it.

I use this for the Mudtool Mudcutter for 5 basic studio tasks.
Here they are (in order frequency):

There are more uses for this tool, but those are my top 5. The 2 parts that make this so tool unique: The very thin wire that cuts through clay without drag, and the depth of the area between the wire and the frame.

One time, a couple of years ago, the wire snapped. I ordered replacements… and it turns out that they were out of stock. I had to wait about 6 weeks for the replacement wire. It was hard being without it. I now have a couple stashed in my studio so I’ll never be caught without a replacement again.

I don’t know if this is a tool that would be helpful to you, but it’s one of my “must haves.” I had no idea when I bought it that it was going to become a tool of daily use for me.

What are some of your favorite tools?