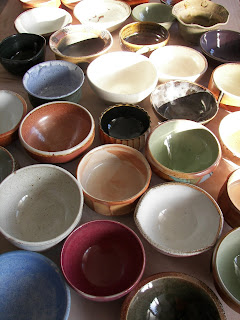 I’m excited to announce that the 3rd Annual Empty Bowls Chicago is coming up on December 12th at Lillstreet.

Empty Bowls is an event that brings pottery, community and good food together to help fight hunger.  For the last three years, my friend Joanna Kramer has been organizing the event for Chicago.  (I’m including a letter from her below that explains all the details.)

If you’re a potter (or vessel maker with another medium), I encourage you to send us a bowl or two.  Just make sure it gets to Chicago by the 12th!  I think the deadline is listed as the 5th, but it’s ok as long as it’s there by the day of the event.
If you’re going to be in the Chicago area on the 12th, I  hope you can join us for a family style meal.   Doors open at 5pm on Friday, December 12th.  There is a room that will have all the bowls spread out on tables (like the picture to your left).  You get to pick out your bowl and then fill it with soup.  Then you’ll eat your yummy meal made by the First Slice Cafe at family style tables and enjoy a good conversation with the other attendees.  At least that is what my experience has been in the past.
If you’re not in Chicago, you might want to think about creating your own Empty Bowls event for your community.  You might remember a post that I wrote last spring about my friend, Jordan Taylor and the event he organized in Scranton, PA.  (Don’t be intimidated, you don’t have to make 1000 bowls… you can start small.)
Here is the letter from Joanna with all the information that you need to know.  Also, you can RSVP to the even via Facebook.

Bring us your bowls and help feed the hungry! Join us on December 12, 2008 for a bowl of soup and help to feed the hungry. The Empty Bowls Project is a nationwide effort by artists to help fight hunger. Lillstreet Art Center is proud to host the 3rd annual Empty Bowls Project to benefit Chicago-area hunger-fighting organizations. We’re asking student and professional potters to donate bowls for this cause.

Empty Bowls works like this: guests choose a bowl and are served a generous serving of soup and bread made by First Slice Cafe, in exchange for a $20 suggested donation. Guests keep the bowl as a reminder that there are always empty bowls in the world. Bowls with an estimated price of over $30 will be placed up for auction. Empty Bowls will take place on Friday, December 12, 2008, 5-8 pm in the Lillstreet Gallery. 100% of the money raised will be given to First Slice, so they may continue to create healthy meals for these local organizations whose mission includes helping those who are hungry and/or homeless:  Heartland Alliance, The Night Ministry, American Indian Center Youth Program, and Howard Area Alternative High School and Chicago-area soup kitchens.  With the revenue generated from last year’s EMPTY BOWLS event, First Slice was able to donate 1000 meals to youth in need.  All donated bowls may be mailed or delivered to Lillstreet Art Center by December 5th. We hope you will participate in this important hunger-fighting event.

Thank you in advance for your generous donation to help feed Chicago’s hungry.

A couple of years ago I was at the Cambridge Pottery Festival in Cambridge, Wisconsin (outside of Madison) visiting my potter friend, Jordan Taylor, who was, at the time, apprenticing with Mark Skudlarek. The festival is an all clay art fair as well as the Pottery Olympics. I was in a bit of heaven for the weekend. I bought a couple of pots from different potters selling their wares. One of the pieces was a simple little temoku bowl with a triangulated rim and rutile brushstrokes on the interior. When I brought it up to the checkout area of the booth, the wife of the maker was tending the sales. Even though I had already decided on my purchase, she began to inform me of the bowl’s many uses. “It’s perfect for ice cream…just the right size for a snack of yogurt…measure out and set aside ingredients while cooking…” I didn’t really say anything at the time – like “I think I can figure it out,” but the whole idea of being told what a bowl was for seemed a little ridiculous. It’s a moment that often comes back to me. I have probably used it for all it’s suggested uses – but I could have figured them out all on my own. I don’t blame her for offering up the list of suggestions, I often get the question “what’s this for” when I sell my pots at a fair or out of my studio. To me, as a potter, it always seems obvious to me.

When I think it maybe not as obvious, I try to use a prop of some sort. Probably the most common pot that has it’s function questioned are my wall vases.

I try to display at least one of them with dried flowers in them, but I guess some people just have a hard time imagining it. Sometimes they want more of an answer of dried or fresh flowers, so I go into stories of people using them to hold real live plants, toothbrushes, or kitchen utensils (depending on the size) or how they’re great for your deck (Chicagoans treasure their decks). But as a rule I don’t offer up this information unless it’s asked. I do understand that the more unusual objects might be a little bit hard to figure out – like the wall vases, oil lamps, butter dishes – but I often get asked the “what’s it for” question for the most mundane pots like little sauce bowls, an oversized mug, or even a teapot. I happily answer the customer’s questions, but I just wonder where people’s imagination and logic have gone. I might think about a really specific use when I’m making things – like a shallow bowl-plate that is just perfect for a fresh salad – but I don’t want to corner my pots into one specific use. I want people to take them home and discover new functions and incorporate them even further into their lives. It wouldn’t have really occured to me to put kitchen utensils in a wall vase, but why not? I think it’s a great idea.

We live in a cluttered world of things that all have a single purpose (and usually aren’t that nice to look at). Think about all the small kitchen appliances that clutter our countertops: rice cookers, bread makers, vegetable steamers, waffle irons, pitzzelle makers. People seem to want to be told what to do. Along with the above mentioned appliances, hair dryers and other electric items all come with very important instruction manuals that tell us things like: “do not operate while in the bathtub or while asleep.”

I suppose it’s a combination of our litigious society and, again, the lack of imagination and logic. I came upon this legal notice for the usage of mugs. I think it’s pretty hillarious, but I hope that it never actually comes to this.